Many advancements in cellular biology have originated from studying large biological structures such as C. elegans, mouse embryos, and organoids.

The remarkable LeviCellTM platform enables scientists working with large cells or cell clusters to efficiently separate particles based on the size or percentage of viable cells. Additionally, due to its stain-free and label-free technology, the LeviCellTM has been proven to successfully sort particles up to 350 μm without compromising gene expression or affecting population representation. Sorting large cells, organoids, and embryonic cells – even samples with low cell starting numbers and dirty samples – can happen in minutes with the LeviCellTM’s fast, gentle, and powerful levitation technology. This leaves scientists with time and opportunity to perform downstream assays with a little less stress from the sample prep process.

LeviCellTM’s gentle and powerful cell separation process enables maximum viability and yield from a variety of primary samples while preserving population representation and genetic expression for downstream assays. The simple three-step LeviCellTM process streamlines the workflow, simplifies the enrichment process (no more clogging!), and minimizes the common issue of low viability and yield due to contamination and damage from multiple instances of handling and washing.

Furthermore, by adjusting the equilibration time inside the cartridge, the LeviCellTM operator can separate particles based on viability and size – for applications where both characteristics are important.

Sample pipetted into the LeviCell™ cartridge.

Selected populations collected into separate ports for further analysis or use.

One of the most challenging and limiting components of generating genetically modified animal embryos lies in the manual characterization and isolation of these specialized specimens, as they are notoriously sensitive and prone to damage during the separation process. The LeviCellTM technology allows for the efficient isolation of viable embryos without the need for staining or labelling – and without affecting genetic expression.

The images shown are testament to the LeviCellTM’s effective embryo isolation capabilities. Fertilized mouse embryos were resuspended in levitation buffer and loaded into the LeviCellTM. After 20 minutes, the fertilized embryos – characterized by the polar bodies – are clearly seen levitating. Collection of the embryos is easily done – without the cumbersome and damaging manual washing procedure. 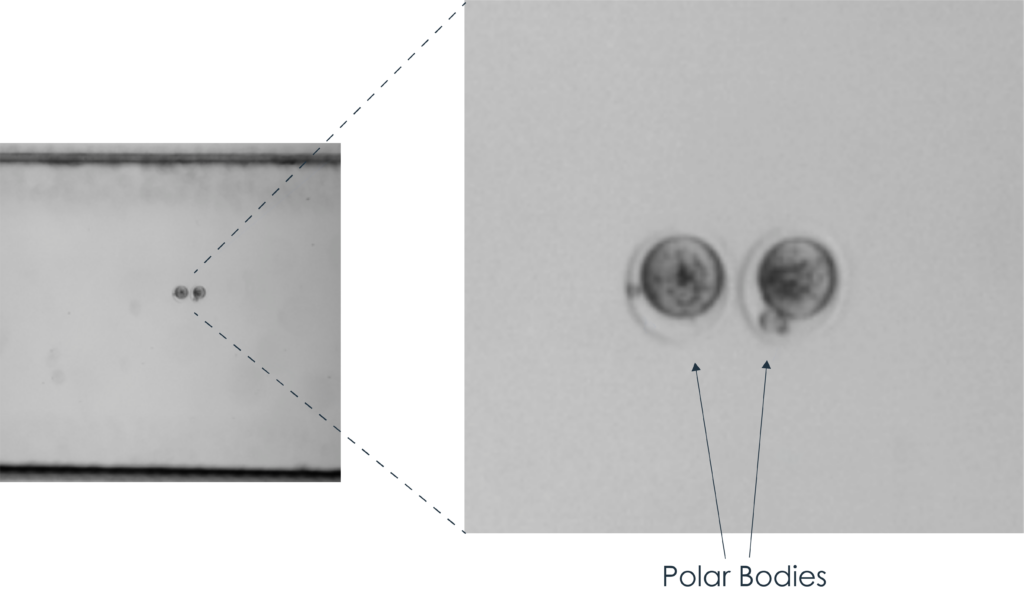 As a model organism for research, C. elegans continues to play a key role in our understanding of the fundamental aspects of developmental biology, neurobiology, aging, and molecular genetics. Unfortunately, their large size and inherent fragility make C. elegans difficult to work with as they typically require manual manipulation and sorting. Current assays involving the use of this nematode require a high level of expertise and finesse to successfully isolate a viable population.

The LeviCellTM simplifies the process of isolating C. elegans, thereby minimizing time spent on troubleshooting deficiencies in separation methods or instruments. As evident in the following image, the LeviCellTM clearly levitated C. elegans undergoing different stages of development into different heights, with eggs levitating higher than adults, and developing nematodes levitating closer to the line of separation.

Much of what we have learned about embryonic development originated from extrapolating observations made from mice and other animal models to human biology. Organoids are three-dimensional cell cultures produced in-vitro to model features of whole organs. These specialized cell clusters play an instrumental role in helping scientists diagnose and develop treatments for various diseases as well as determine the roles of certain cells.

Organoids are infamously problematic in most separation methods because of their size. Often, prior disaggregation is necessary to accommodate the limitations of current methods and technologies. Some common issues experienced during isolation of organoids include sensitivity to manual manipulation and complexity of separation technique that often result in low viability, minimal enrichment, and lack of scalability.

The image below exhibits a mouse cell line that forms organoids when grown in culture. This sample was levitated in the LeviCellTM. The three-step, label-free, gentle and powerful levitation technology enables robust viability without triggering activation processes or causing cell death. The LeviCellTMplatform’s cell separation process results in a clear partition between viable organoid cell clusters (top clumps) and dead cells (bottom clumps).

While traditional cell sorting techniques work well to isolate cells smaller than 20μm, they are not an efficient method for separating large cell structures such as spheroids, embryos, and C. elegans. Sorting large cells is a slow process for many current technologies – as clumping, clogs, and contamination often create bottlenecks during separation. Scientists studying large cells know that the tradeoff to obtaining viable embryos, spheroids, or C. elegans is time. The process is painstakingly slow and frustrating. The LeviCellTM offers respite from this issue by enabling the separation of structures up to 350μm in 20 minutes. 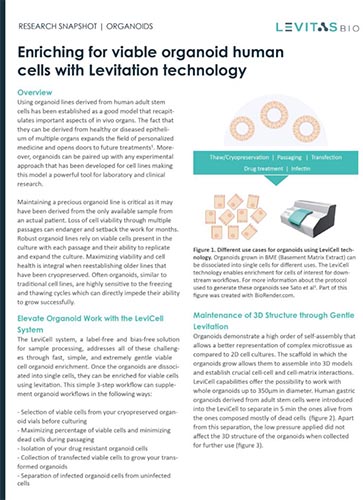 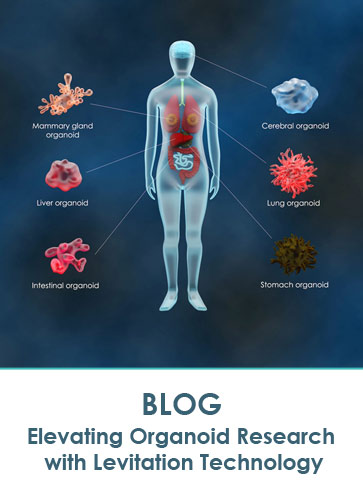 As LeviCell technology provides a fast and easy separation of live and dead cells, it can be used to sort the resistant cells of an organoid culture after a drug treatment for further analysis and characterization.