Basics of Gene Engineering with CRISPR-Cas9

CRISPR (Clustered Regularly Interspaced Short Palindromic Repeats) sequences are found in the DNA of prokaryotes as part of their adaptive immunity. Scientists have modified this mechanism to create a gene editing tool called CRISPR-Cas9 that can be used to knock-in, knockout or correct a genetic sequence in almost any cell type at specific targeted breaks. Cas9, (CRISPR-associated protein 9), is a nuclease required for double stranded DNA breaks.

Cas9 is attached to a target specific CRISPR sequence, or a guide RNA (gRNA), which directs the enzyme to the segment of DNA to be cleaved. The gRNA contains the genetic alteration necessary to activate (knock-in/overexpress) or deactivate (silence/knockout) the gene of interest. Once the complementary DNA is recognized by the CRISPR-Cas9 complex, the gRNA binds to the target DNA, activating Cas9 enzymatic activity. Cas9 causes a double strand DNA break, prompting the cell’s other enzymes to activate the repair process. The use of CRISPR-Cas9 allows a targeted break, where the DNA repair process then embeds the desired genetic change directed by the gRNA during the repair process. 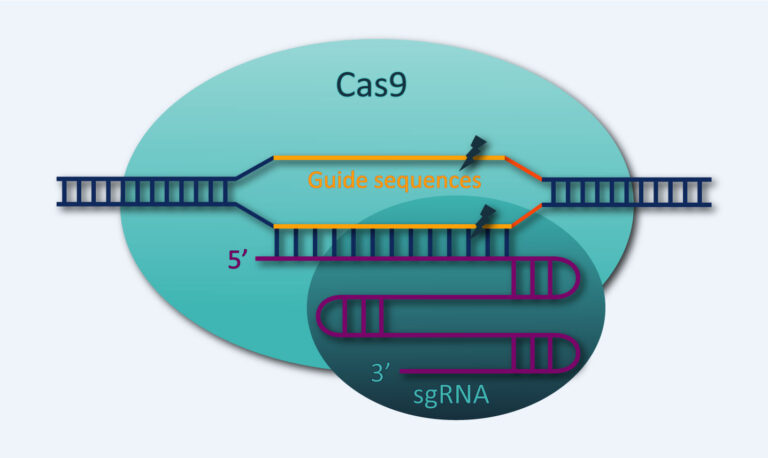 Schematic of CRISPR-Cas9 complex. The single-stranded guide RNA (sgRNA) recognizes the target sequence of the DNA and binds, activating the Cas9 enzyme to perform the cleavage. The desired genetic alterations are then performed using the cell’s repair machinergy.

As previously mentioned, the CRISPR-Cas9 system can be used to knock-in, knockout or correct a genetic sequence. This genome editing technology has been used to investigate the regulation of endogenous gene expression, gene function studies, epigenome editing, live-cell imaging of chromosomal loci and high-throughput screening. These genetic alterations can be used in a wide variety of research areas that span from insects, to horticulture/agriculture, to targeting human disease.

Human Disease Modeling
Genomic modification using CRISPR-Cas9 has enabled scientists to understand specific gene function and the impact of genetic mutation on the organism as a whole. The recent use of CRISPR technology in humans, has advanced the eradication of sickle cell disease and will give rise to more research avenues in the future.

Exploring Some Challenges of CRISPR-Cas9 in Cell Culture

The main benefit of using CRISPR in a viral vector is construct specificity. CRISPR-Cas9 has been used in cell line development and to examine mechanisms of disease and/or disease resistance with hopes of discovering new therapeutic targets for cell and gene therapy. However, due to complexities associated with the technology, numerous challenges are associated with gene editing tools using viral delivery systems.

Viral delivery, whether it’s a Lentivirus or AAV vector, can be a roadblock due to cargo capacity of the desired target, cost of viral vector constructs (particularly in academic research), as well as longer wait times due to supply shortages. The efficiency of gene editing via viral delivery systems, particularly among sensitive cell types, is a significant challenge for scientists. This low rate of efficiency is further exacerbated when more cells are used or the number of edits are increased—creating a lack of scalability. When scientists try to perform combination editing (successive rounds of specific gene editing in one cell type), viable cell enrichment after each round is required to obtain the desired results. Scientists performing CRISPR require highly viable cells that can be easily separated from the dead/dying cells in an efficient, gentle, and fast manner. This is critical as dead cells will create an environment in which surviving cells will ultimately die if not properly separated.

How Our Technology Improves Cell Usage Beyond CRISPR-Cas9 Editing

As discussed in our blog, Multiplexed Intermixed CRISPR Droplets (MIC-Drop) are used for larger scale genetic studies, allowing identification of multiple genes that are essential for healthy development and function. This advanced CRISPR-based technology speeds up the workflow by introducing each gRNA-Cas9 mixture individually to an embryo, delivered in oil-encased droplets.

Enabling alterations, these large-scale gene engineering studies can help decipher distinct players in genetic modifications that can alter development. Subsequently, the downstream effects of these CRISPR modifications can be examined for functionality—linking gene with function or its role in specific signaling cascades that may be up- or down-regulated with deletion, particularly if those are cell-type specific.

Viable cell enrichment of genetically engineered cells performed on the LeviCellTM alongside the downstream assessment of single-cell genomics could be critical for understanding the consequences of altering a specific gene during early development. In addition, by performing viable cell enrichment on the LeviCellTM system, cellular debris and nonviable cells are removed, allowing scientists to focus on cells of interest.

Without viable cell enrichment after CRISPR modification, the ability to effectively identify and isolate rare genetically modified surviving clones can be masked. In our featured CRISPR poster, Dr. Ernesto Diaz-Flores of UCSF, highlights his discovery of rare BCL-2 CRISPR knockout clones that were missed with FACS, but discovered with the LeviCellTM system.