Abstract: The use of CRISPR/Cas9 is a key research tool for the study of gene function and role in cancer. In combination with magnetic levitation technology, the ability to enrich for rare genetically modified clones becomes achievable where otherwise impossible with standard techniques such as cell sorting. Previously shown, hypodiploiod B cell acute lymphoblastic leukemic (B-ALL) cell lines, including the NALM-16 cell line, were highly sensitive to inhibition of BCL-2 by Venetoclax in vitro. However, inhibition of BCL-2 is not complete and residual activity remains present in some cells, leading to therapeutic resistance over time.

In this study using the LeviCell™ system, we enriched for surviving NALM-16 cells that had BCL-2 knocked out via CRISPR-mediated gene editing. We show here that dead or dying cells post CRISPR modification can mask the ability to effectively identify and isolate surviving clones. Without the use of the LeviCell to quickly and gently enrich these rare surviving cells, these clones would be unavailable for further study. 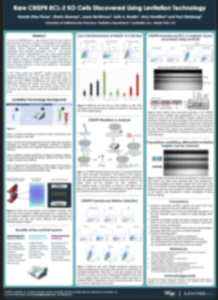